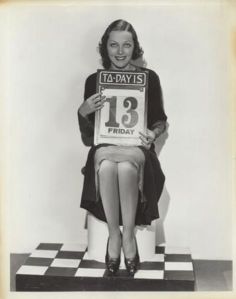 If you’re a superstitious person, I would imagine today is the day you are avoiding black cats walking in front of your path, ladders, umbrellas indoors and a myriad of other superstitious things we avoid on Friday the 13th. Or maybe you’re not but you’d partake in a Friday the 13th marathon with Mr. Voorhies just to get your kicks for the day.

I do admit, I am a little superstitious. But I’m into the strange and weird so I enjoy the fun of it mostly. I use to be a waitress and if I was cleaning a table and a salt shaker spilled over, I had to throw a little bit over my shoulder. I still do it today but it occurred, as expected, much more often working in the restaurant industry. I’m also a horror movie fan and the Friday the 13th films have always been my favorite classic horror slasher flicks. 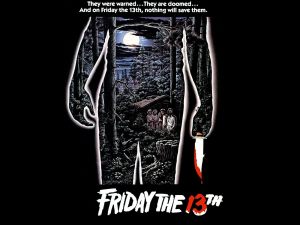 For those that fear the date, they are considered Paraskevidekatriaphobic (Go to NPR’s link for pronunciation). Then there are those that consider the fear of this date to be quite ridiculous and so silly that there was a group of Chicago businessmen that formed the Anti-Superstition Society of Chicago in the early 1940s. These gentlemen had more of a fun time with Friday the 13th instead of fearing it. Life magazine documented their jolly event to show the world these men were not afraid of any black cats or crossing under any ladders.

Below is how Life magazine explained the meeting in their January 6, 1941 issue:

At 6:13 p.m. on Friday, the 13th of December, 169 audacious and irreverent gentlemen sat down to dine at 13 tables in Room 13 of the Merchants & Manufacturers Club of Chicago. Each table seated 13. Upon each rested an open umbrella, a bottle of bourbon and 13 copies of a poem called The Harlot. The speaker’s table was strewn with horseshoes, old keys, old shoes, mirrors and cardboard black cats. Before it reposed an open coffin with 13 candles. The occasion was the 13th Anniversary Jinx-Jabbing Jamboree and Dinner of the Anti-Superstition Society of Chicago … [which] meets regularly on Friday the 13th. (There have been 13 Friday the 13th’s in the last eight years.) Behind the ribaldry of its recurrent dinners lies the very sound thesis that superstition annually costs this country an inexcusable sum of time and money. People postpone trips because of mirrors and cats. Businessmen defer decisions because of calendrical coincidences.

To combat these persistent bogies, the Society has assembled much counter-evidence. According to mathematical laws of probability, one of 13 guests of different ages at any dinner party may very well die within a year. But the ratio of probability will soar even higher if 14 guests attend. One corpse out of 18 is a 50-to-50 bet.

Happy Friday the 13th Readers and remember…don’t go swimming in the lake, don’t have sex, don’t do drugs, don’t go out, don’t slip and fall in front of the killer and certainly don’t say, “I’ll be right back!” 😉 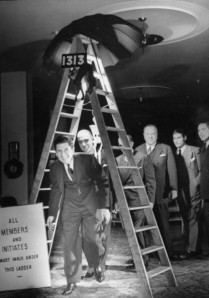 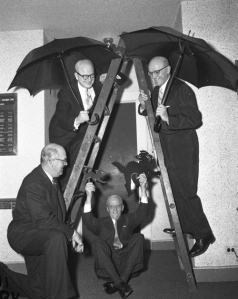